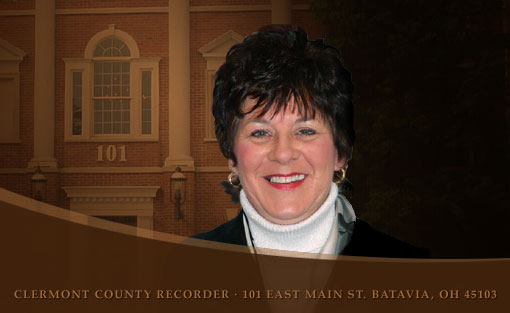 Welcome to the Clermont County Recorder’s Office.  I hope this web site will provide you with a better understanding of the responsibilities, services, and public records maintained in our office.  Our public records CountyFusion Search Website will give you access to the records available online.  Records unavailable online can be accessed by visiting our office located at 101 East Main Street in Batavia, Ohio.  The professional, dedicated staff of the Recorder’s Office will be glad to assist you by phone or during your office visit.

Our goal is to provide the public with accurate records that are easily accessible and made available using the most affordable technology.  We continually strive to improve and maintain excellence in record preservation for Clermont County.

DID YOU RECEIVE ONE OF THESE LETTERS?

The Clermont County Recorder’s Office has seen recent increase in calls regarding the cost for obtaining a “certified” copy of a property owner’s deed. Property owners are receiving letters from private companies offering their services to obtain a certified copy of their deed for them at cost of $80.00 or more. These companies are getting public information from property transfers. They ARE NOT attached to any government agency although some of the company names would lead you to believe they were.

All property deeds are public information. As county recorder, I would like to let you know the true cost for you to receive your deed, mortgage any other document recorded in our office. The fee for a copy of a document is $2.00 per page and $1.00 for the certification. The average deed consists of three pages and the dollar charge for certification will cost you a total of $7.00. Quite a difference in cost for these companies that want to charge you $80.00 to $90.00 for the same exact thing they are getting from our office. The staff of the Recorder’s Office will do this while you wait. It should take five to ten minutes of your time. You may also request a copy by mail by sending in the correct fees and a self- addressed stamped envelope for your document to be returned to you. You may also print out a copy directly from our CountyFusion Website.

History of the Recorder’s Office

THE PRACTICE OF RECORDING real estate documents is based on law in England which traveled to the New World with the colonists. Public land registrars were appointed in colonial America to keep accurate records. A system of registration was necessary to prove the rights of persons who first made claims to property.

TODAY THE COUNTY RECORDER KEEPS AND MAINTAINS accurate land records that are current, legible and easily accessible. An important aspect of the Recorder’s work is to index each document so it may be readily located. Accurate indexing makes it possible for persons searching land records to find the documents necessary to establish a “chain of title” (history of ownership) and ensures that any debts or encumbrances against the property are evident. These invaluable records are utilized by the general public, attorneys, historians, genealogists and land title examiners.

In some counties, certain property is registered under the Torrens Act. This “registered land” has boundaries certified to be correct; title is guaranteed by a state insurance fund. Torrenized land records are the responsibility of the County Recorder. In 1998, working with the Clermont County Commissioners, the process to “abolish” registered land began. After public hearings and an act signed by the Recorder and Commissioners, registered land was abolished on February 2,1999. All Registered Land certificates will be kept in the Recorder’s office. No updates will be made to those certificates.

DOCUMENTS RECORDED IN THE RECORDER’S OFFICE ARE GENERALLY CONSIDERED TO BE PUBLIC RECORDS. INFORMATION CONTAINED WITHIN THESE RECORDED DOCUMENTS IS ACCESSIBLE TO THE PUBLIC, UNLESS SPECIFIED OTHERWISE BY THE OHIO REVISED CODE.

ALL RECORDS ARE RECEIVED, KEPT, AND PRODUCED BY THE RECORDER IN ACCORDANCE WITH THE OHIO REVISED CODE CHAPTER 317. RECORDED DOCUMENTS WITH UNENFORCEABLE RESTRICTIVE COVENANTS EXIST. THE RECORDER’S OFFICE MAKES NO REPRESENTATION REGARDING THE CONTENT OR ENFORCEABILITY OF ANY DOCUMENT, INSTRUMENT, OR OTHER RECORD KEPT BY THIS OFFICE, AND THE RECORDER HAS NO AUTHORITY TO ALTER OR REDACT THE CONTENTS OF, OR OTHERWISE DELETE ANY RECORD RECEIVED OR MAINTAINED BY THE RECORDER EXCEPT AS SPECIFICALLY AUTHORIZED PURSUANT TO OHIO REVISED CODE CHAPTER 317.